Articles relating to the
​spal collection 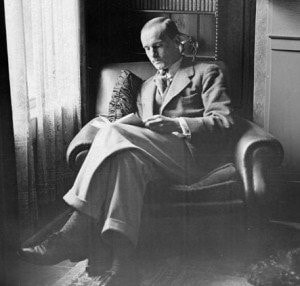 ​NewSPAL trustee Carol Hall writes below about RC Sherriff whose name may be unfamiliar but some of whose work will be much more well known.  He had a life-long Surrey connection and the SPAL collection contains a selection of his work.  Read on!

Robert Cedric Sherriff (known personally as Bob, and to the literary world simply as R C) lived in Esher for most of his life.  He was born in Hampton Wick, Middlesex, on 6 June 1896 and was educated at Kingston Grammar School, where he won several sports prizes.
He enlisted into the army in November 1915 with the Artists Rifles and by September 1917 had obtained a commission with the East Surrey Regiment as a Second Lieutenant. He served in France until he was wounded in action on 2 August 1917 during the Battle of Passchendaele (Third Battle of Ypres), and was sent back to England for treatment.
He never returned to active service in France, and remained with the 3rd and 12th Battalions, the East Surrey Regiment, in Britain until he was demobilised in early 1919. Sherriff’s ‘Officer’s Record of Service’ shows that he retained the rank of Second Lieutenant throughout his active service in France. Later while on home service he was promoted firstly to Lieutenant on 5 March 1918, and then later to Captain on 8 January 1919. In 1919 Sherriff unsuccessfully applied for a permanent commission in the army, and he returned to working for his pre-war employers in insurance. He devoted his free time to sport, creative writing and amateur dramatics.
He wrote at least six plays on an amateur basis, often as a means to raise funds for local causes and organisations: A Hitch in the Proceedings (1921); The Woods of Meadowside (1922}; Profit & Loss (1923); Cornlow in the Downs (1923); The Feudal System (1925); and
Mr Birdie’s Finger (1926). Sherriff also acted in several of these early plays, as did his sister Beryl Sherriff.  Sadly we do not have copies of these early plays in the SPAL collection.
Then, in 1928 Sherriff wrote Journey’s End, his most spectacular dramatic success, which was performed for just two nights at the Apollo Theatre in London. The play was set in the trenches in March 1918, and was based on his own experiences and comrades at the Western Front. It was well received, and the play transferred to the Savoy Theatre in January 1929. It soon proved to be a critical and commercial success. None of his later plays achieved the success of Journey’s End.

In the 1930’s Sherriff also began his career as a screenplay writer and wrote and co-wrote various film scripts, including The Invisible Man (1933), One More River (1934) and The Road Back (1937). His biggest success came in 1939 when he was nominated along with Eric Maschwitz and Claudine West for an Academy Award for writing the adapted screenplay for Goodbye, Mr Chips. This career continued in the 1940’s with That Hamilton Woman (1941), This Above All (1942) and the Academy Award winning Mrs Miniver (1942), for which he was an uncredited writer. In 1956 Sherriff was nominated for BAFTA Best British Screenplay Awards for The Dam Busters and also The Night My Number Came Up, both of which had been released in 1955.
In 1944 Sherriff resumed play writing. Many of these later plays were performed in the West End. We have a number of these plays (in sets) in the SPAL collection: Miss Mabel (1949); Home at Seven (1950); Long Sunset (1955); Telescope (1959); Shred of Evidence (1961); and White Carnation (1954).  It would be an interesting project for a play-reading group to read all these plays! He also wrote a number of novels, and a memoir No Leading Lady (1968), which is available for reference only in the SPAL collection.

Sherriff never married, and remained devoted to his mother, with whom he lived, latterly at his Esher house ‘Rosebriars’. He died in Kingston Hospital on 13 September 1975.
Sherriff bequeathed his papers to the Governors of Kingston Grammar School, while his royalties were divided between the School and the Scouts Association. He also bequeathed his home to Elmbridge Borough Council as an arts venue. It was later sold, and the capital realized on its sale established the RC Sherriff Trust (formerly the Rosebriars Trust), which supports the arts within Elmbridge Borough.
There are three collections of Sherriff’s papers held at the Surrey History Centre, all of which are now fully catalogued and accessible thanks to the Heritage Lottery Fund, and support from Surrey History Trust, Kingston Grammar School, The RC Sherriff Trust, and Curtis Brown Literary Agents.
​
See below for items by RC Sherriff in the SPAL collection available for hire: 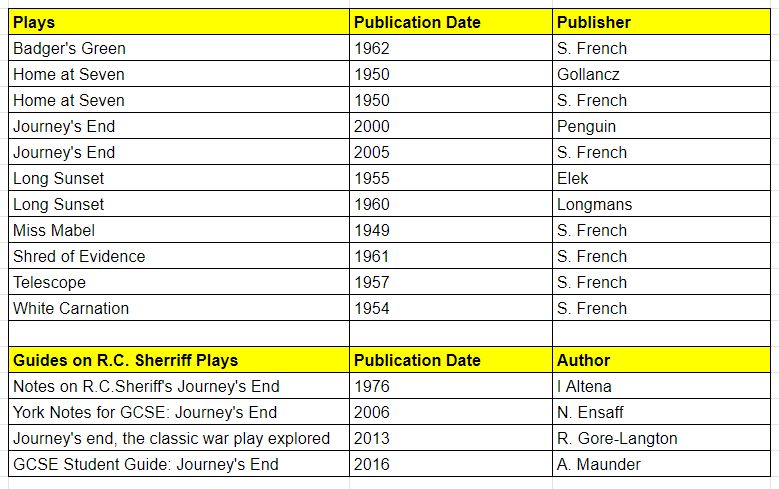 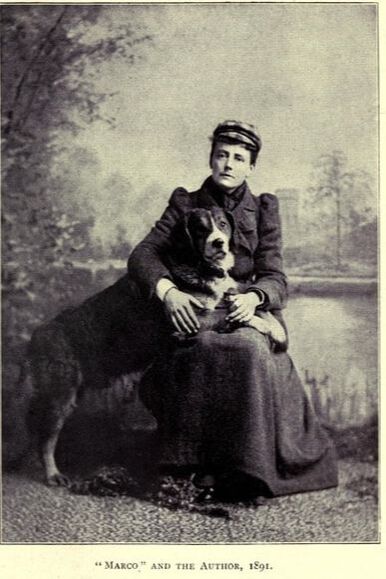 Ethel Smyth was the fourth of eight children – six girls and two boys - born to Major General John Hall Smyth of the Royal Artillery and his wife Emma nee Struth. Her childhood was spent in Sidcup near Woolwich where her father commanded the Artillery Depot having recently returned from India and then Frimley near Farnborough from 1867 when her father, promoted to General, took command of the Artillery at Aldershot. It was at this time that Ethel discovered her aptitude for music and started composing – she says mainly psalm chants and hymns – and playing the piano and singing with her sister Mary. Their duets became a feature of home dinner parties. Her mother, who was musical, albeit untrained, encouraged her. When a new governess who had studied at Leipzig Conservatorium arrived and introduced her to classical music, Ethel aged 12 became determined that she would go to Leipzig to study there.

Harmony lessons with an army officer colleague of her father who also happened to be a composer introduced her to Wagner and she conceived a desire to have an opera produced in Germany before she was forty. Her father wanted her to ‘be presented’ and to marry but Edith was determined to study to be a composer. Edith had begun to slip away to London on her own to attend concerts – she borrowed money from local tradesmen and told them to put the sum on the General’s account. This provoked a confrontation with her father and she said that she would have to go to London to hear music if she was not allowed to go to Leipzig.  She embarked on a campaign of disobedience, refusing to go to got to church, refusing to sing at dinner parties and refusing to talk to anyone and her father finally relented. A family friend who recognised Ethel’s talent and wanted to encourage her produced a respectable aunt who would look after her and Ethel departed for Leipzig in July 1877.
Finding the teaching at the Conservatorium unsatisfactory Ethel started to take private lessons with Heinrich von Herzogenberg whose wife Elisabeth (known as Frau Lisl) was a former pupil and close musical confidant of Brahms. Through the von Herzogenbergs Ethel gained access to the highest levels of music society in Germany and was able to observe Brahms himself from close quarters.
The story of Ethel’s childhood and teenage years illustrates three characteristics that proved to be typical of her whole life: her defiance of convention in refusing to marry and choosing to be a composer, her ambition, moreover, to compose operas, the most expensive form she could have chosen rather than the piano pieces and songs that were the typical output of most female composers at the time, and her iron determination to have her own way.
​
Some miscellaneous Ethel Smyth facts
Further reading/listening
Copies of many of Ethel’s books are available for reference at the Surrey History Centre which also holds manuscript and printed copies of March of the Women. Alternatively, Ronald Crichton’s abridged selection from her writings with his informative introduction and a comprehensive list of compositions complied by Jory Bennett may be found online at the Internet Archive.
Spotify has many recordings of Ethel’s music.  There is also a recording of the 1958 BBC programme broadcast by the BBC to mark her centenary which begins with Sir Thomas Beecham’s extempore tribute and concludes with a number of anecdotes recalled by people who knew her well, including her niece.
There are also many recordings available on YouTube including a remarkable one of a radio broadcast, probably dating from 1935, in which Dame Ethel gives her not wholly complimentary recollections of Johannes Brahms.
The website www.ethelsmyth.org is dedicated to celebrating the life and achievements of Dame Ethel.

​The SPAL collection holds a number of items relating to Ethel Smyth including scores, recordings of her music, and 3 books about her. Notable compositions include ‘The Wreckers’ and a Mass in D major. Smyth was heavily involved with the women’s suffrage movement (causing her to serve 2 months in Holloway prison). In 1911 she wrote ‘The March of the Women’, dedicated to Emmeline Pankhurst, which became the anthem of the Women’s Social and Political Union.  See below for items by Ethel Smyth in the SPAL collection for hire: 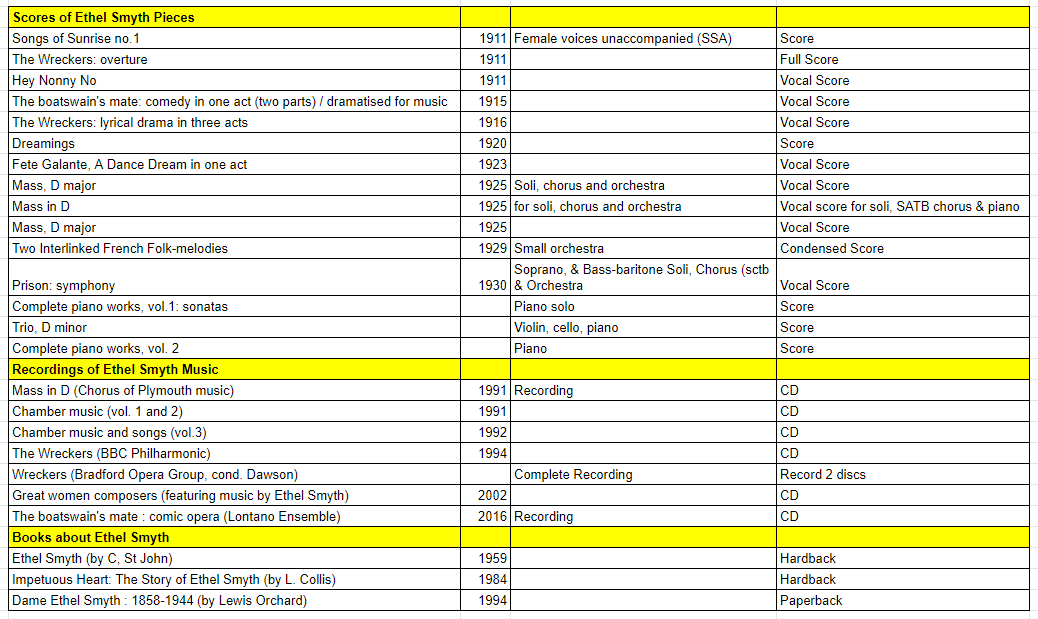